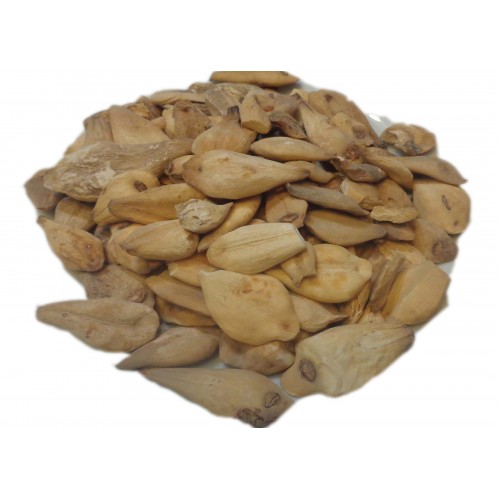 Colchium autumanle, Linn. Is that species which grows in moist meadows and pastures in England, central and southern europe and north africa. It is not found in india. Since the time of the ancient Greeks, Seeds and corms of this species , have been used as a specific treatement for gout. The active principle is the alkaloid ‘Colchicine’ found also in Colchicum luteum, Gloriosa superba, Merendera persica, Androcymbium gramineum and other plants.

Colchicum luteum, Baker has been recognized in open pasture lands or in the out-skirts of forests extending from western temperature himalays muree hills to kashmir. Hence it is also known as Kashmir hermodactyls. It is bitter variety of colchicum i.e Suranjan talkh.

Another species has been under-use which is not biiter in taste but sweet and hence called Suranjan shirin or sweet variety of colchicum. It is recognized as Merendera persica, Linn and found in Iran.

Both varieties of Suranjan i.e bitter and sweet , are now available in the market but the sweet variety is weaker in action and safer in use than the bitter one.

Tubers fo Colchicum are of three colours belonging to different species viz. White , yellow and Black The white is not bitter , yellow is slightly bitter. Both these varieties are used in medicine. The black one is too much bitter and poisnous and hence not used internally. In sweet variety the corm is starchy, dirty yellow externally and white internally. In the bitter variety , the colour is dirty brown from outside and pale-white inside and also starchy.

When the plants are two years old, corms are collected. They are somewhat conical in shape,

rounded on one side and flattened on the other with small depression near the base containing a bud. The corm is enclosed in a thin , brown, membranous outer coat and  a reddish-yellow inner – coat . The fresh corms usually measure 15-35 mm in length and 10-20 mm in diameter. The dried corm breaks easily and the broken surface is white and starchy. After removing the scaly coats, the corms are sliced transversely and dried at a temperature not exceeding 65 degrees.

Bitter variety is only used externally in rheumatism in the form of poultrice or oil. A paste made of it with saffron and white of eggs, is applied to rheumatic and other swellings. However some authorities use bitter variety also orally alone or with other drugs but in small quantity.

Sweet variety is used internally as deobstruent , alterative , resolvent , sedative, and aperient for phlegm. It is used alone or with aloes or other drugs in rheumatic diseases , gout and sciatica. It is also used to check intermittent fever, to relieve bronchial catarrh and congestion of the air-tubes. It is useful in hysteria, chorea, whooping cough and epilepsy.

White variety is good for chronic wounds and useful in gout and as poultice. It is theriac for all the joints particularly durign the catarrhal process. Not good for stomach and produces gastric weakness. Purgative, and sex-stimulant. Red and black varieties are poisonous.