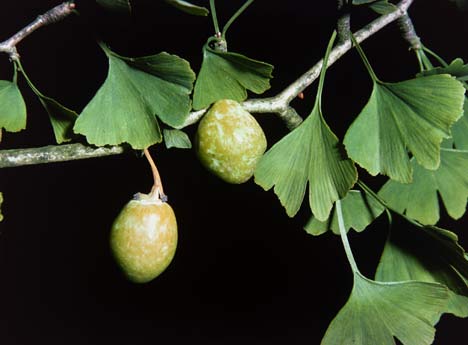 Ginkgo preparations have been used to treat such conditions as

Memory problems, and Circulatory problems throughout the brain and body.

As of 2002, research has been concentrating on the possibility that Ginkgo Biloba may be a helpful adjunct therapy for memory deficits occurring in Alzheimer’s disease.Ginkgo is also being explored as a possible treatment for impotence and other circulatory disorders.
DESCRIPTION

The active ingredients of Ginkgo Biloba appear to include

Flavone Glycosides have antioxidant properties. They prevent damage to the cells in the brain by chemicals called free radicals.

Terpene Lactones improve memory by improving the uptake of the
neurotransmitter component choline in the nerve synapses.

Terpene Lactones also help guard against blood clots within the brain, and may provide some protection against metabolic injury.

Ginkgo biloba is available in a variety of forms, including extracts, capsules, and tinctures.

Because of Ginkgo’s effects on platelets, there has been some concern regarding interactions between Ginkgo Biloba and anticoagulant medicines, such as warfarin (Coumadin) and aspirin. Studies so far have indicated that Ginkgo does decrease platelet function occasionally. For patients taking Ginkgo, their physician can monitor their platelet function. Rare case reports exist of patients experiencing hemmorhage (including cerebral) while taking Ginkgo